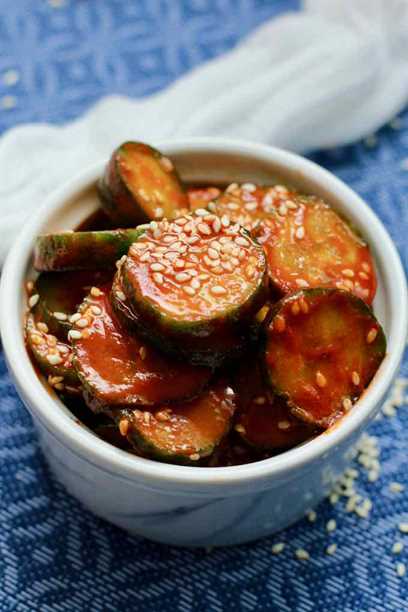 What is oi muchim?

Originally from Korea, I heard a lot It is the traditional spicy cucumber salad. It can be made with various varieties of cucumbers, but be careful to choose them crisp and fresh.

Also, the spicy salad oi muchim is part of the tradition of kimchiVegetable dishes that are left to ferment in brine for several weeks until they develop an acidic flavor typical of spicy fermented vegetables. Oi muchim is often served to accompany the famous Korean barbecue.

Kimchi (김치) are dishes prepared from vegetables marinated in brine. They are salty and generally spicy. Koreans serve kimchi as an accompaniment to every meal. These kimchis are the symbol of a good home.

Kimchi can be made from various types of vegetables. Cabbage and radishes are the most widely used vegetables. In addition, it is common in Korea to make kimchi from other varieties of vegetables such as cucumbers, sweet potatoes, lettuce, and spinach.

Brine salt is preferred to normal cooking salt for preparing kimchi in the initial salting stage. In fact, it has larger grains and is less processed, preserving the aromas of fermented vegetables. This salting step is crucial to drain the liquids from the vegetables before seasoning them.

Different types of kimchi were once made at different times of the year. The seasonality of the vegetables was a factor of choice in their preparation. It was also necessary to take into account the seasons of the year, to guarantee the optimal conservation of these fermented vegetables. 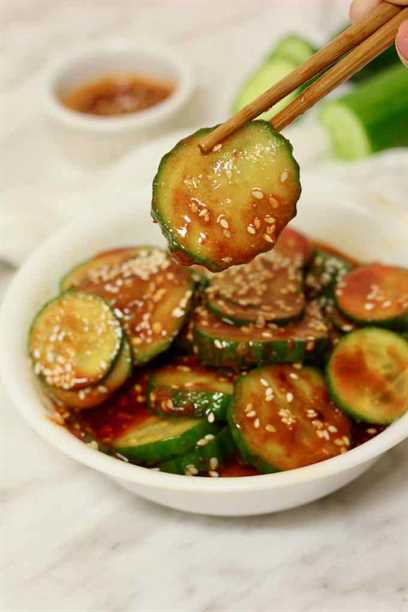 In Korea, you will find this spicy cucumber salad with two names: I heard a lot (오이 무침) or oi saengche (오이 생채). But is there a difference between these two names?

The Korean language uses characters from the Chinese alphabet called Hanja (한자) Before the invention of Hangeul, the Korean alphabet as we know today, most Koreans were illiterate.

In 1443, King Sejong the Great created the Korean Hangeul alphabet. Before the creation of this alphabet, the privilege of writing was reserved for elites who were fortunate enough to have an education or aristocrats. These elected officials were called Yangban (양반)

Before 1443, Koreans spoke their own dialect but used Chinese characters to write, complicating matters. In fact, the Korean and Chinese languages ​​have very few similarities. That is why it was so difficult to write Korean words with the Chinese alphabet (Hanja) in the past, before Hangeul was created.

Etymologically oi means cucumber and muchim means "covered with sauce" in Korean. Oi saengche has a different meaning. In fact, the word saengche It comes from the Chinese word (生菜) which means "raw" or "live" instead of cooked dishes.

The different varieties of cucumber.

The cucumber is a whimsical species to grow, since it appreciates being close to cabbage, beans and lettuce. However, cucumber does not mix well with tomato or potato.

The oi muchim salad can be prepared with various varieties of cucumbers. These three species are the most frequent:

The different types of kimchi

One of the most famous kimchis is undoubtedly the one made with napa cabbage. Is named Baechu Kimchi (배추 김치).

Another variety of cucumber kimchi is very popular in Korea: oi sobagi (오이 소박이). It is a kimchi made from seafood stuffed cucumbers (usually salted shrimp) and Korean pepper paste. They are frequently consumed in spring and summer. 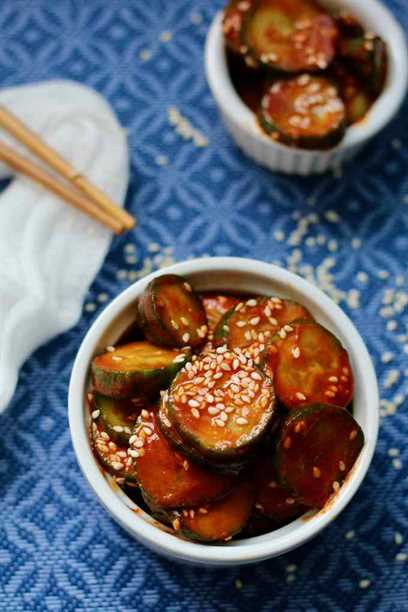 Oi muchim is a delicious traditional Korean salad made with cucumber and red pepper flakes.

Did you find this post helpful, inspiring? Save THIS PIN in its blog board in Pinterest. 😉 CoreadelMuchimsur