It's so hot … I don't feel like doing one. Single. Thing. Nothing. Slow, tired and no motivation at all. I hate that feeling. It makes me feel guilty! But that's what it is.

And that kind of day made me think about this! Hearty, but quick and so simple to make from the pot to the table in less than 30 minutes! Pictures included!

My kind of simple meal in the summer! Especially when you're just not feeling well and cooking becomes an unwanted task.

It's a comforting meal, "that's what it is," and it's been around since 1910, when the US Army first added it to their cookbook! Their original historical recipe prepared "Enough for 60 Men" and gained tremendous popularity during World War II in 1935 and somehow got a nickname by the soldiers, "Shit On a Shingle". Or else. O. S. ”too short. The "shingles" were toasted bread, which was then covered with chopped beef in a creamy, white sauce sauce. (* I mean nothing disrespect by using the "s word", but just the opposite in what I call it, out of respect for the soldiers and the story, what it was and still is called.)

Maybe they started calling it because of the repetition of having to eat it so often? Everything can get tiring when you have to eat it every day.

I guess we can't know unless we can ask someone! And although there are newer, more "loving" anagrams for "SOS," such as "Something On a Shingle," "Same Old Stuff," and comic, "Save Our Maves," it will always be known by the nickname the soldiers gave that while surviving in the fields during World War II.

And for that, it deserves historical correctness and respect.

My hubby, a former Navy Seal, fondly remembers this dish served at breakfast time during his years of serving in the U. S. Navy. So I make it special for him every now and then, and it's always a welcome and heartfelt meal.

I once had extra pastrami and made it out of it, and we enjoyed it so much that we both preferred it this way ever since. Pastrami is spicier than the traditional corned beef used, and has a nice coating of coarse pepper that adds an extra punch of flavor.

I've also found that thick sliced ​​bread, such as "Texas Toast" bread, holds up much better to the rich, creamy béchamel.

Tom loved it, and now doesn't want it any other way!

Don't buy the expensive, toasted, frozen boxed stuff, though. Yuck. They sell bread with plain, fresh "Texas Toast" bread that is best toasted even right in your regular wide toaster or toaster oven. It shakes just as fast as a regular bread slice, so you don't have to toast it anymore either.

Lovely and golden on the outside and tender inside. Perfect for this dish.

Although I've changed the recipe a bit, I've stuck to most of the original ingredients that taste it, but with just a few extra things that take it over the top.

The original U. S. Army recipe calls for beef stock, but I prefer a chicken flavor and add a bit of real chicken broth base made from Superior Touch, which I love for my homemade, rich béchamel.

All their broths are so much better than the awful little cubes and granules. It is more expensive but worth every penny and lasts quite a bit. A must-try people! But be warned, once you try it, you will never return! But that's a good thing. 😉

"Fresh is always best," so use fresh parsley if you have it. If not, don't worry, I've also included the amount of dried parsley because I've used it in a pinch, and it really works just fine.

And always serve with lots of coarsely ground pepper on top! While this is traditionally a breakfast dish, we actually enjoy it for lunch and dinner too. It’s wonderfully served with a simple side of buttered sweet baby peas and a dab of homemade mash or fried potatoes!

Whether you are a military family or have relatives serving or serving, or just have fond memories of enjoying this as a child, this is a kick-up dish that you will love at first bite and is a fairly economical meal, which is also served to a large family or hungry among a budget.

It will soon be a much appreciated dish that will become a family favorite for many years to come! I hope you enjoy my version, which is "Navy Seal-approved", very much made with love and always welcome at our humble table. I hope it is made in your home soon too! Have a great day and try to stay cool in this awful heat wave! 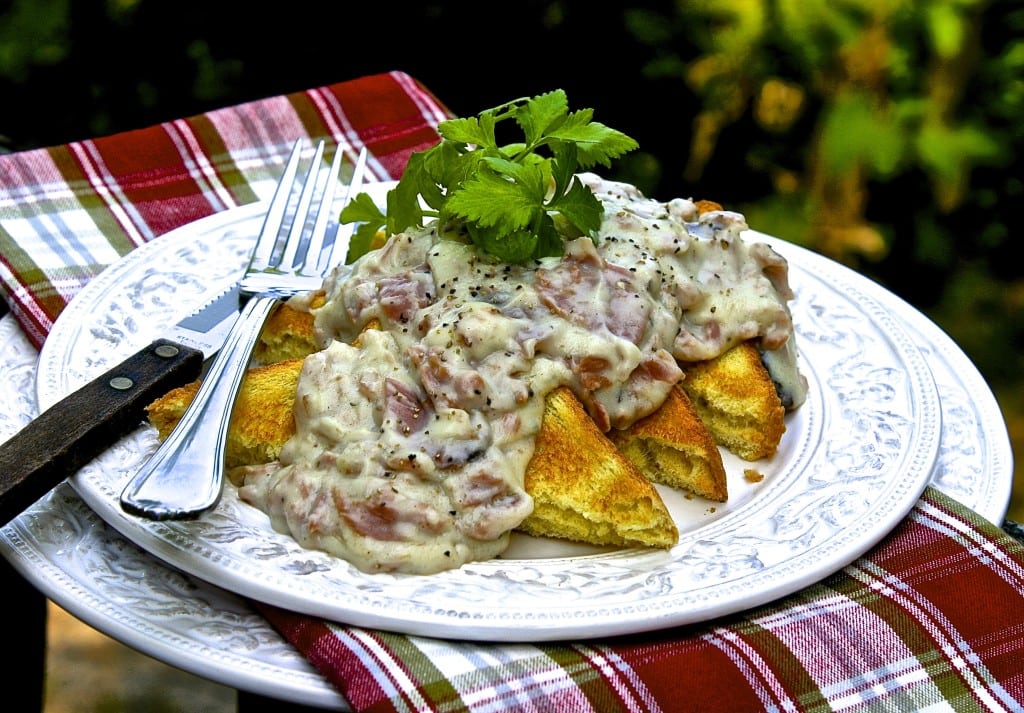 In a small bowl, cut up or tear pastram slices into small pieces, take them aside.

Melt butter in a large skillet. Stir flour and cook under stirring over medium heat for 3 minutes to cook out the raw flour taste. Don't brown. If it starts to brown, turn down the heat.

Turn down to low and slowly simmer in milk so that it is well mixed and no lumps ensure a creamy sauce. Whisk parsley, chicken broth base, garlic powder and onion powder in. Burn heat back to medium, and stir until low boiling / simmer while stirring constantly. Cook, stirring, until thickened, for 3-5 minutes. Remove it from the heat. Add a teaspoon. of sauce at a time to beat egg yolks in a small bowl, stir to heat them without seasoning them, add approx. 2 Tbl. sauce in everything. Scrambled eggs egg yolk mixture in sauce. Stir in salt and white pepper. Return to low heat, add pastrami and heat through with stirring. Remove it from the heat and cover.

Pop bread in toaster and toast. Cut corner-to-corner, place them on plates and tow wood over Texas Toast points. Serve with lots of pepper on top.